Tiger JAX-T10U-K 5.5-cup rice cooker is a modern rice cooker that Tiger Corp. develops, and it’s a computerized machine that works with the sensors and logic to make the best rice meal and other types of foods.

This rice cooker has some very unique features. In this detail Tiger JAX-T10U-K 5.5-cup rice cooker review article we will guide you about all the important feature and cons of this device for you so you can decide whether this rice cooker suits your need. 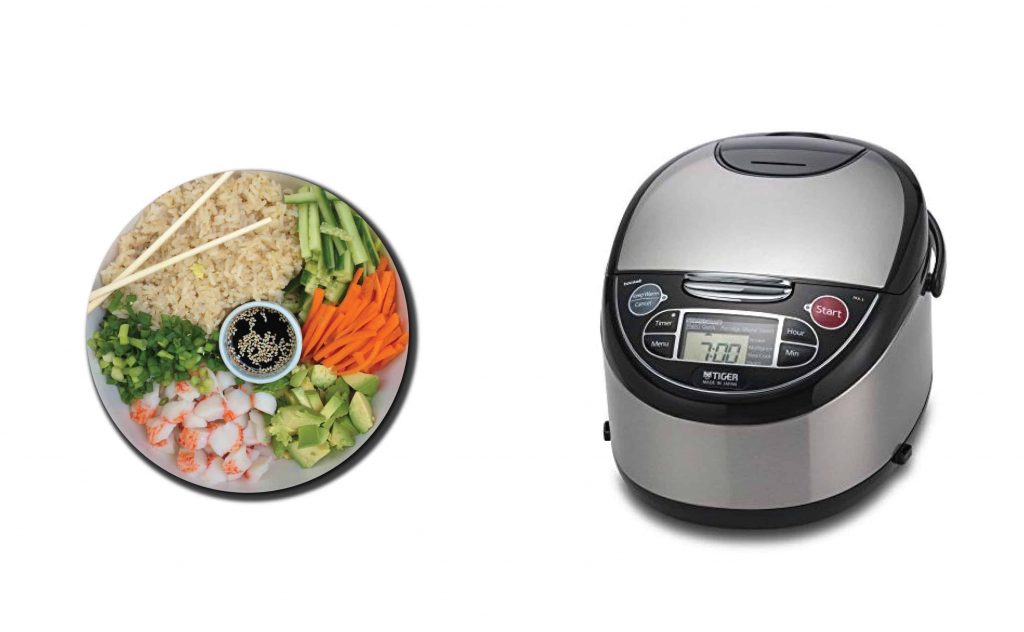 Tiger Corporation is an Osaka (Japan) based business that has produced an extended range of beautiful products over the period of time.

It was founded in 1923, and its first product was vacuum bottles to keep the drinks warm by insulation, that was a winning item , which led to the foundation for this company.

Tiger JAX-T10U-K 5.5-Cup Rice cooker is very compact and well designed. It can be easily movable with its lightweight of 6.83 pounds.

Its outer body is made of stainless steel and has a shine on it. It is available in black color, which looks elegant and bold.

Tiger JAX-T10U-K 5.5-Cup has a digital input control with an LCD display, so you can easily choose between the different modes it offers. The inner pot is also made of steel which can be washed easily after use.

Tiger JAX-T10U-K rice cooker has an amazing features, that sums about 10 cooking settings for users. All these cooking modes can be easily chosen from the digital control panel of the device.

Some of the key features of this model are given here.

Tiger Corporations develop a phenomenal method of cooking that saves both time and energy of the process. and it’s now available in Tiger JAX-T10U-K rice cooker.

This method is known as Tacook or Synchro-cooking, this feature allows two different foods to be prepared at the same time. This means that if you place the rice and water in the inner pan, a ‘tacook plate‘ comes with the cooker’s accessories.

You can put vegetables or meat on this plate and adjust this above the pan with rice and water. The steam produced in the cooking of rice will automatically cook the veggies in the tacook plate.

Tiger JAX-T10U-K rice cooker has an amazing feature of simmering or slow cook, which allows the food to dip in hot liquid to be ready to serve.

The hot liquid has an average temperature just below its boiling point. It slowly cooks the food to its innermost layers and retains its nutrients to the most.

This feature allows you to prepare a large number of meals like soups and porridge etc.

You can steam cook the veggies and meat in Tiger JAX-T10U-K rice cooker. The plate for steaming is provided with the cooker, and it adjusts over the inner pan while cooking continues.

The steaming of food is healthy and advised by nutritionists in order to consume healthy ingredients. So it is very fascinating for the health-conscious people and caters for their needs of healthy food.

Meat can also be treated by steam, so you get a tasty meal full of proteins and vitamins.

Brown Rice is famous for its specific use for a healthy diet; although it consumption comes after the white rice, but still, a noticeable population uses brown rice as their primary rice choice.

The brown rice has a thick outer body that requires more time to cook. This Tiger JAX-T10U-K rice cooker has a ‘Brown Rice‘ cooking option that will cook them at the most exemplary level for you.

So this cooker is a value-added machine for brown rice users too. 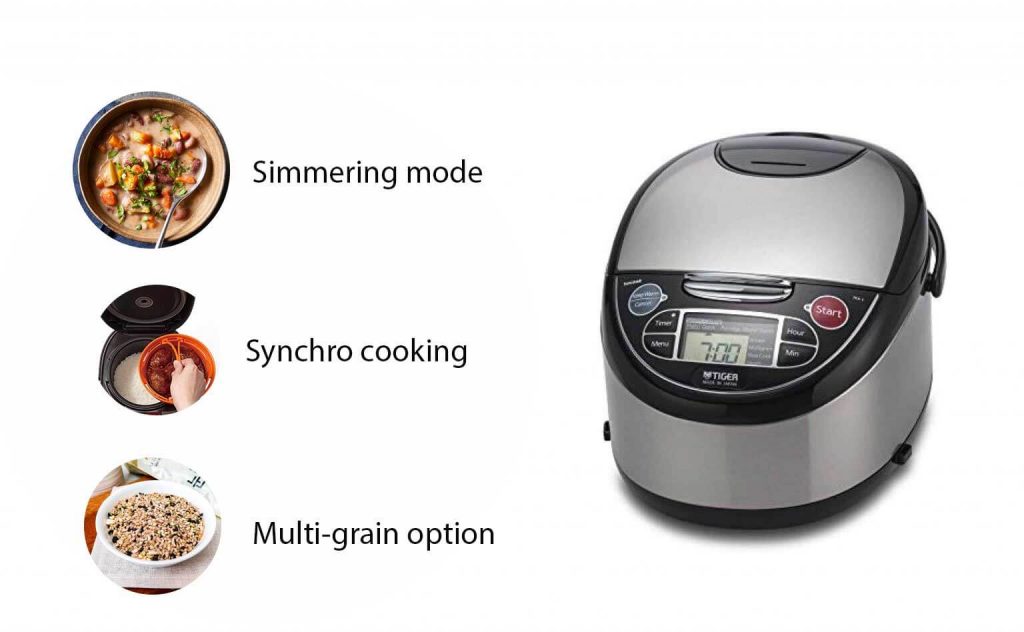 Besides the brown and white rice, Tiger JAX-T10U-K rice cooker has a multigrain option. This means that now you can cook all kinds of grains in this cooker.

The multigrain option is provided for the comfort of the consumers who also want to enjoy other grains. This option allows you to make porridge from the grains or their non-porridge form too.

Multigrain rice is also a very healthy diet for fat burning and reduces the chance of heart diseases, so a win-win for health-conscious people.

The cooker is equipped with digital logics, which means that a microcomputer operates inside a JAX-T10U-K rice cooker. That means that it monitors the cooking process and handles the rice cooker accordingly.

It is a fantastic fact that Induction Heating is a new feature that is introduced in many cooking devices of Tiger Corp. Ltd.

The IH allows the alternating current (AC current) to generate the heat energy for the inner pan so that the food will be prepared quickly and the whole process is under a super controlled environment.

Sensors of the device can easily adjust the temperature conditions as per the demand.

It is provided with an inner pot of 1.5 mm thickness, and it is covered with a non-stick coating. A steaming plate for the steam cook function is supplied with a food grade plastic make.

A measuring cup is also in the packing so you can measure the rice efficiently.

A ladle is also here with a spatula to mix and carry out the rice from the inner pot.

A cook book is also given for free so that you can enjoy different types of dishes at home. The inner for steam venting is here with a detachable body and can be washed easily.

Tiger JAX T-10U-K 5.5-Cup Rice Cooker is a very good option if you like the classical Japanese technology with modern features provided in it.

Get all latest content delivered to your email a few times a month. Updates and news about all categories will send to you.