Aroma MTC-8008 Professional Rice Cooker is an all-rounder in many aspects; this review will guide you about the vital information you need to know before purchasing this multi-faceted product.

The festivity of the cooking process is now elevated to a new level by the best professional Aroma MTC-8008 Rice Cooker. The way it treats your food is terrific and mouthwatering in itself and turns it into the most delicious item on the table.

The newest additions to the arsenal of this model are Sauté-then-Simmer STS® with the technology of turbo convection. Aroma MTC-8008 Rice Cooker behaves like a professional family chef who knows the likeliness of your taste buds and then makes the food according to your choice.

The futuristic design it has is out of the box and left a very pleasant impression on the user. Aroma mtc-8008 is designed as a portable device that can be placed and easily fit into any place, whether its tabletop, the shelf or countertop etc.

Two colours are available, i.e. champagne and black, which have a shine on them, and the outer body is scratch-proof, so its beauty remains for years to come. Aroma MTC-8008 body is easily washable and can be easily wiped clean. Aroma MTC-8008 Professional Rice Cooker is an ultra user-friendly rice cooker that caters to all the cooking demands of modern-day foodies.

The brushed metal exterior allows it to maintain its allure for many years, helping to prevent any scratches while also allow it to be wiped clean with ease.

The Aroma MTC-8008 Professional Rice cooker can do many tasks besides cooking the rice, which is much more capable than that. Aroma MTC-8008 multi-cooker can prepare various types of foods, e.g. grains, soups, porridge, cakes, and Sauté-then-Simmer and slow cook modes are also included. All of these mentioned above are no issue to this cooker.

The steam tray in it can be simultaneously used for the steaming the meat and veggies while cooking the rice. So the entire meal is done in one functioning cycle of it. This device values your precious time by fast action and prepares the rice quickly by using its “Quick Rice” setting in few minutes. So now the long waiting for a healthy meal is over with Aroma MTC-8008.

It gives you the feature of a delay timer for up to 15 hours.You have to just set the timer by placing the ingredients as directed and set the timer for the desired time, and when you reached home at that time, the freshly cooked meal would be waiting for you in advance. This ability of Aroma MTC-8008 makes it the perfect choice for busy individuals and families alike. 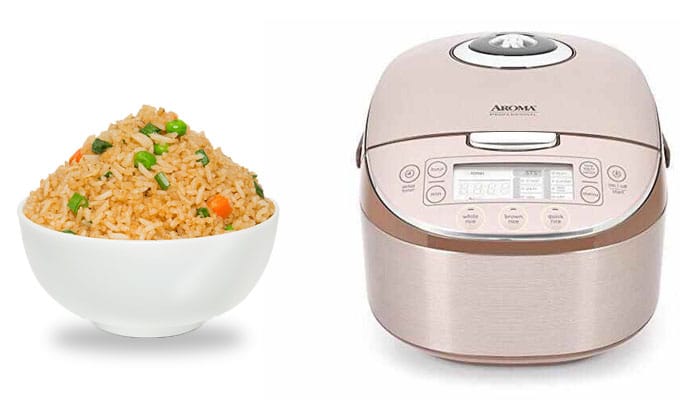 The Aroma MTC-8008 model has a spherical inner pot for the safe and homogeneous heat treatment of the rice, the quality of cooking is the same from the upper to lowest layer of the rice. The thermal flow of the steam and heat is managed in such a way that a perfect blend of taste and looks is formed, and the meal looks splendid with a mouthwatering aroma.

Aroma MTC-8008 Professional Rice Cooker is a wonder in itself with the infinite possibilities and the versatility it offers to the users. It acts as a customized chef for your family and friends by making juicy, tasty and perfect rice items in addition to the entire meal course and desserts.

Nearly more than 12 modes are present in this device, such as: soup, steam mode, brown rice, slow and mild cook, quick rice mode, sauté-then-simmer STS, grains, warm mode, delay timer, white rice, steamy veggies, cakes, porridge and much more. Aroma MTC-8008 Rice Cooker will get you covered in all of these scenarios.

Aroma MTC-8008 Rice Cooker provides a concave inner pot for the homogenous heat transfer across the rice so the upper and lower layers are cooked at the same intensity. This spherical design spreads the moisture and steam equally and decreases the cooking time with flawlessness by maintaining the healthy ingredients of the meal safe with a great taste.

As many of the other rice cookers become hot from the outer surface, this cooker is carrying a fantastic feature of cool touch technology; it insulates the heat, remaining the external body of the Aroma MTC-8008 very cool during the cooking so it is safe to use when the kids are in proximity. There is no reason to be afraid of touching this cooker while working, you can easily move and carry it while the cooking cycle in progress.

We all have witnessed the burnt rice at the bottom of conventional rice cookers because the heating system they use mainly affects the bottom part of the inner surface.

This problem is solved by Aroma as the Aroma MTC-8008 Rice Cooker is equipped with the latest Turbo Convection technology, which circulates the warm air evenly in the entire cooker to get evenly cooked fresh rice with no leftovers sticking at the bottom of the inner pan.

Aroma MTC-8008 rice cooker has a unique feature of delay timer up to 15 hours. This fantastic feature allows you to manage your food preparation according to the time plan of your day.

You can fill up to 8-cups of uncooked rice in it and set the cooking time, so when you came back at the given time, you will get the freshly prepared rice meal at home.

Aroma MTC-8008 rice cooker gives you an edge over the conventional rice cookers by time leverage that it provides you by automating the whole cooking process and thus increasing your productivity on a daily basis.

Overall experience of using Aroma MTC-8008 Rice Cooker is very impressive according to the user ratings and it’s a good choice for your happy family.

Get all latest content delivered to your email a few times a month. Updates and news about all categories will send to you.